Woodland caribou continue to decline across the country, including in Quebec,” says Environment Canada. The federal government points out that no province has developed the protection plans needed to stop the destruction of the critical habitat of this endangered species.

Some progress has been made in the recovery of the boreal caribou, but after five years, the overall population of the species continues to decline due to increased disturbance of its habitat, says the summary of the first progress report on the implementation of the federal recovery strategy for the species, published Tuesday.

More needs to be done to promote the recovery of boreal caribou, including the development of robust range plans or similar documents, the report’s authors also said. This is a request that has been made for several years by environmental groups calling for better protection of this species.

Boreal caribou, found in the boreal forest and with populations in nine provinces and territories, are listed as a “threatened” species under Canada’s Species at Risk Act. However, because deer live mainly on provincial lands, management of the caribou’s different ranges is primarily a provincial and territorial responsibility.

The provinces, including Quebec, are not doing enough to halt the continued decline of boreal caribou. Although they have had five years to “develop” plans to protect the species’ critical habitat, they have not been able to meet the timelines set by the federal government. 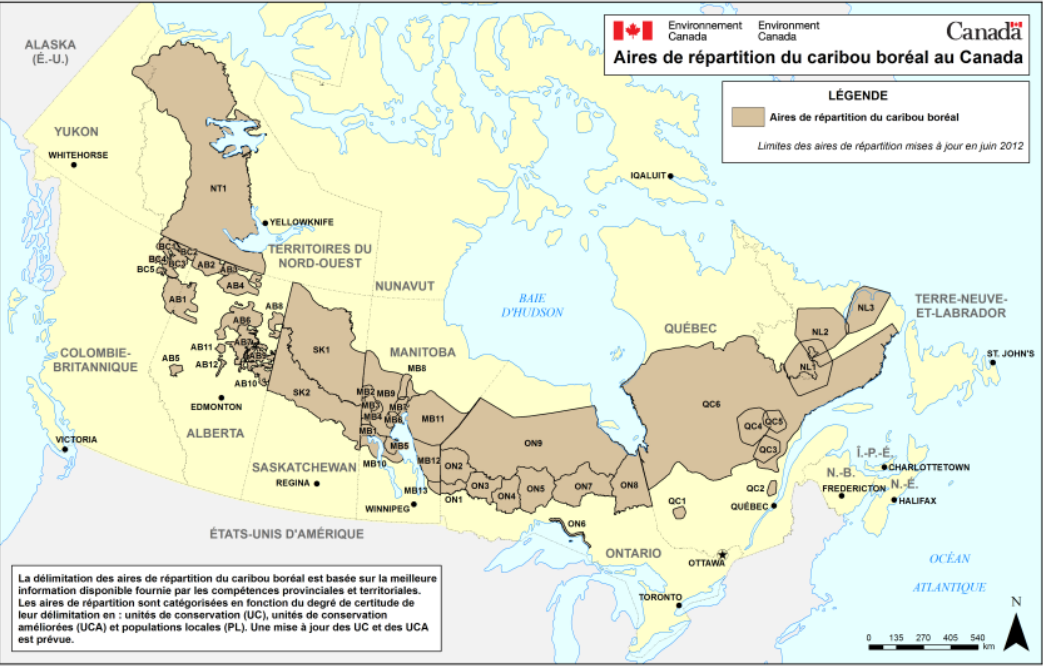 “Quebec expects to have completed the second phase of its provincial action plan by the spring of 2018“, said the report released Tuesday by Environment and Climate Change Canada. This component includes the development of a long-term strategy for habitat development.

Among the priorities identified by federal authorities, it is imperative that the provinces put in place measures to ensure that at least 65% of caribou habitat is “undisturbed“. Beyond this threshold, the recovery of the species is simply compromised.

Federal government data on the different ranges (including the Val-d’Or herd) in Quebec indicate that caribou habitat is increasingly disturbed. Currently, five of the six herds identified as “declining” or “stable” do not meet the 65% undisturbed habitat threshold.

In all cases, disturbance has increased between 2012 and 2017. For example, the Charlevoix herd’s habitat has increased from a disturbance rate of 80% to 82%. During this time, the herd went from “stable” to “declining“. It has less than 100 head.

In the vast majority of cases, human-caused disturbance is the main cause of habitat disturbance. Areas frequented by caribou are particularly affected by forest development, but also by mining projects and road construction.

Reacting to the release of the report by her department, Minister Catherine McKenna emphasized the “importance” of this species, particularly as a “key indicator of the health of the boreal forest“.

“Its continued decline is a cause for concern and has implications for all of us. I am committed to protecting the species under the Species at Risk Act and recognize that an unprecedented level of commitment and collaboration is needed to ensure the recovery of this species”, she said in a news release.

For Greenpeace, the federal report demonstrates the lack of provincial will to protect these cervids. “This report confirms the fact that disturbance of woodland caribou habitat is increasing due to the inaction of provincial governments who are not doing what is necessary to protect and save this threatened species“, said Olivier Kolmel, Greenpeace Canada’s Forest Campaigner.

The environmental organization also believes that protecting critical woodland caribou habitat would allow Canada to “meet its international commitments” under the Convention on Biological Diversity by protecting 17 per cent of its land and inland waters by 2020.

The David Suzuki Foundation, which released a report Tuesday showing the growth in disturbance of caribou habitat, is calling on governments to take action on this issue. “If the provinces fail to implement such measures, the federal government must use the tools provided in the Species at Risk Act to provide a safety net for this endangered species“, said its spokesperson, Louise Hénault-Ethier.

The David Suzuki Foundation also recalled that the Couillard government had decided earlier this year to transfer the last caribou in Val-d’Or to the Saint-Félicien Zoo, a decision that was eventually reversed. But the construction of a road in the heart of the herd’s habitat, in favour of the forest industry, is still planned. And a mining project should also see the light of day there.

Recalling that logging is progressing ever more towards northern Quebec, the Société pour la nature et les parcs pleaded for the creation of a protected area in the area of the White Mountains, located north of Lac-Saint-Jean.